Baby Lamb & Friends is a web-series created by Simon A. and released on the Baby Lamb Creations YouTube channel. The series released the premiere of its first episode on YouTube on April 29, 2016. The show contains a total of 5 seasons, 79 episodes, 6 shorts, and a movie.

The series involves a young and happy-go-lucky little sheep named Baby Lamb as well as his colorful and unique friends: including his best friend Cow McMoo, the sweet and bubbly Belle Butterfly, wisecracking Ricky Bowers, wise Donny Dolphin, and sassy Alice Pennington. All of them live in the random fictional town of Capitol City, where they tend to get into random situations and even learn important life lessons about themselves and the world around them. The show uses a mixture of live-action and animation as well as plush toys, "paper puppets", LEGO mini-figures, and others.

The Making of the Series

Every single episode of "Baby Lamb & Friends" is made and produced with iMovie. Initially, the first 5 episodes were shot on an iPhone 4. Eventually, it was switched to an iPad or an iPad mini, which is still used to this day. The first 38 episodes were all shot and edited with the mobile iMovie app, but following Baby Lamb Creations' switch to iMovie for iOS in early 2017, episodes afterward are still recorded with the iMovie mobile app but are currently edited with iMovie for iOS. The designs for some of the characters were originally hand-drawn on paper in Season 1. But in early Season 3 they were digitally drawn with Sketchpad, and in late Season 3 to present, they are digitally drawn with the AnimationCreator app which Simon A. uses for character designs and also animations.

Originally, there were plans to make a film adaptation of Baby Lamb & Friends and a video announcement was made in 2016 promoting the movie, but eventually, due to time constraints as well as recording issues, the idea was canned. 3 years later, on May 4, 2019, Baby Lamb Creations announced on Twitter and on YouTube that "Baby Lamb & Friends: The Movie" is officially in development and is said to be released summer of 2019. However, due to personal obligations that delayed the initial deadline, the movie was delayed. A sneak peek was uploaded on June 29, 2019, and the first official trailer was released on September 15, 2019. Another trailer was uploaded on October 26, 2019, and the third and final trailer was uploaded on November 4, 2019. The movie features the 6 main characters, some new characters, special guest roles from various YouTubers, and it is shot in Cinemascope.

The movie itself premiered on November 9, 2019.

It's about an evil yet pathetic guy named The Dark Slayer who may look threatening but is actually a very lousy villain. So, he sets out to prove to everyone in Capitol City that he is a real villain by plotting to destroy the town and rule its people with an iron fist. Baby Lamb and the gang don't believe him until The Dark Slayer proves them wrong, takes over the town, and kidnaps everyone. The rest of the gang seeks vengeance, but Baby Lamb realizes something serious about The Dark Slayer. 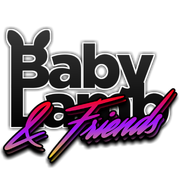 The Series Logo (made by Brendan Barney) 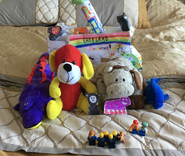 Every Character in the Series (Season 1) 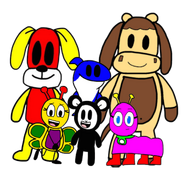 Early 2020 Designs of the 6 Main Characters

2020-present designs of the 7 main characters

Cassandra Cat Model Sheet (Current)
Add a photo to this gallery
Retrieved from "https://babylambandfriends.fandom.com/wiki/Baby_Lamb_%26_Friends?oldid=3247"
Community content is available under CC-BY-SA unless otherwise noted.