"Baby on Board" was a song originally written by Homer Simpson and sung by The Be Sharps that was sung by The Police-Shop Quartet of Four Mans (Chief Mark and Officers Derek, Aaron, and Marvin). The song was sung in the episode of the same name . 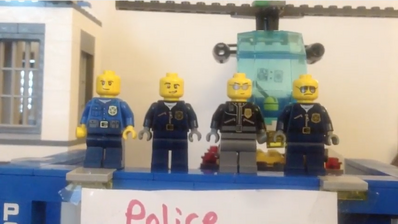 Chief Mark
And a one, and a two, and a three...
Officer Derek:
Ba-bum, bum bum.
The Police-Shop Quartet of Four Mans:
Baby on board, how I've adored
That sign on my car's windowpane.
Bounce in my step,
Loaded with pep,
'Cause I'm driving in the carpool lane.
Call me a square,
Friend, I don't care.
That little yellow sign can't be ignored.
I'm telling you it's mighty nice.
Each trip's a trip to paradise
With my baby on board!

Homer Simpson had the idea while he was trying to create a song for The Be Sharps and Marge showed him a Baby On Board sign she was going to put in her car (although apparently the lyric mentioning Burt Ward was excised). This song ended up being the number one hit of The Be Sharps and some years after the quartet split, they re-joined on top of Moe's Tavern to sing this song.

The song was collectively written by The Dapper Dans (Harry Campbell, George Economou, Shelby Grimm, and Danny Jordan) and Jeff Martin. This song was also part of the album Songs in the Key of Springfield.

The song was partially sung by Disneyland's The Dapper Dans even though the series' normal voice actors can be heard every now and then.

Retrieved from "https://babylambandfriends.fandom.com/wiki/Baby_on_Board_(song)?oldid=664"
Community content is available under CC-BY-SA unless otherwise noted.