Cowell "Cow" McMoo is one of the main protagonists in Baby Lamb & Friends.

Cow, as his name implies, is a large (and somewhat fat) cow with tannish brown cowhide over his body, while his ears, hair, tail, hands, and feet are all brown. He also has a brown splotch on his back.

Although he is a cow, he does not have udders (which makes sense considering male cows aren't supposed to have udders, contrary to popular belief).

Cow is a very lovable and huggable animal, although he can be clueless and even goofy more often than not. Even if he can be idiotic, he does have a heart that's as big as himself and he cares for the safety and well-being of his good friends, especially his best friend, Baby Lamb. In the earlier episodes, however, he does act wise at times.

Baby Lamb is Cow's bestest best friend, and the two are inseparable. There's not been a moment in the series where those two fought or argued, but they do have a very big friendship and they always care and look out for one another.

Compared to Cow, Baby Lamb does seem smarter, but he's willing to help Cow out and do stuff with him.

Not just in appearance, but personality-wise, the two are pretty much opposites. Ricky and Cow may not get along as well as Baby Lamb and Cow do, but still Cow has a heart for Ricky just the very same. Ricky can act cocky to Cow as well, but Cow doesn't seem to mind whatsoever. 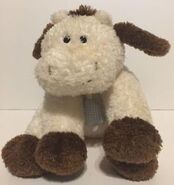 Add a photo to this gallery
Retrieved from "https://babylambandfriends.fandom.com/wiki/Cow_McMoo?oldid=2819"
Community content is available under CC-BY-SA unless otherwise noted.