Donald "Donny" Dolphin (usually referred to as Mr. Dolphin) is one of the main protagonists on Baby Lamb & Friends.

Donny is a blue dolphin with blue, stubby fins, a large blue fin on his head, a white belly, and small brown eyes similar to those of Ricky Bowers.

Donny is usually very smart, very wise, and ready to help his fellow friends whenever they're in need. Although sometimes he can be sarcastic, even in times when things don't go right. 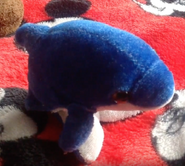 Add a photo to this gallery
Retrieved from "https://babylambandfriends.fandom.com/wiki/Donny_Dolphin?oldid=2842"
Community content is available under CC-BY-SA unless otherwise noted.