Richard "Ricky" M. Bowers is one of the main protagonists on Baby Lamb & Friends.

Ricky is a dog whose arms, legs, and ears are yellow while his torso and head are red and his muzzle is white. He has small brown eyes and a big black nose. He also has a small yellow tail (which was added as of early 2020 as a redesign).

Most of the time, Ricky tends to act cocky and conceited, and even bashful. But in spite of that, he has a heart and he cares for his friends very deeply. 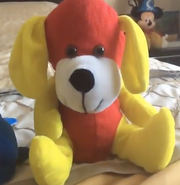 Add a photo to this gallery
Retrieved from "https://babylambandfriends.fandom.com/wiki/Ricky_Bowers?oldid=2908"
Community content is available under CC-BY-SA unless otherwise noted.